Finally, I did it. Sushi seemed not so bad. 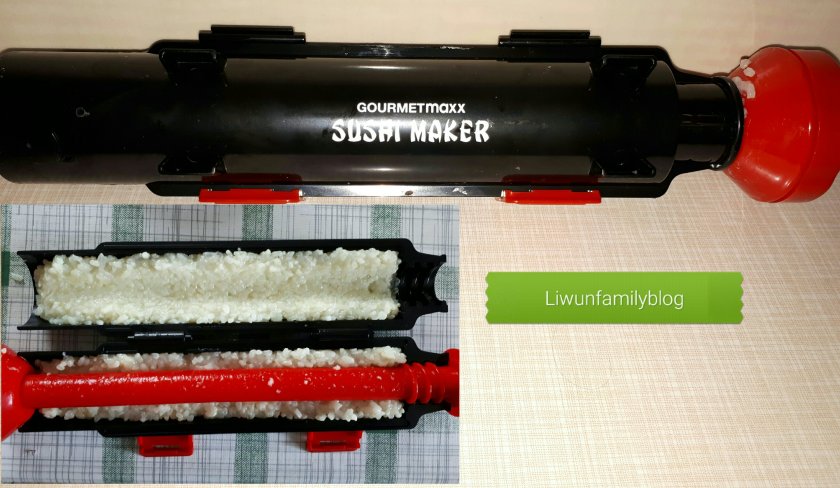 I love to eat sushi together with my husband. Taste of sushi served better in cold food and seafood inside than vegetables only. When we bought in here, sushi set packs are more less 4€ – 10€. In Asian surely sushi was more cheaper. In Germany, you can buy sushi also in Japan restaurant or Asian restaurant.

One day I found a weekly booklet price promotion that offered by supermarket which made less price for sushi maker. Wow, the sushi maker got discount to be 75%. We bought sushi maker and then trying out it at home. Simple plan I thought!

The idea was good instead of buying sushi outside. So here in detail of steps I did how to make sushi in such as below: 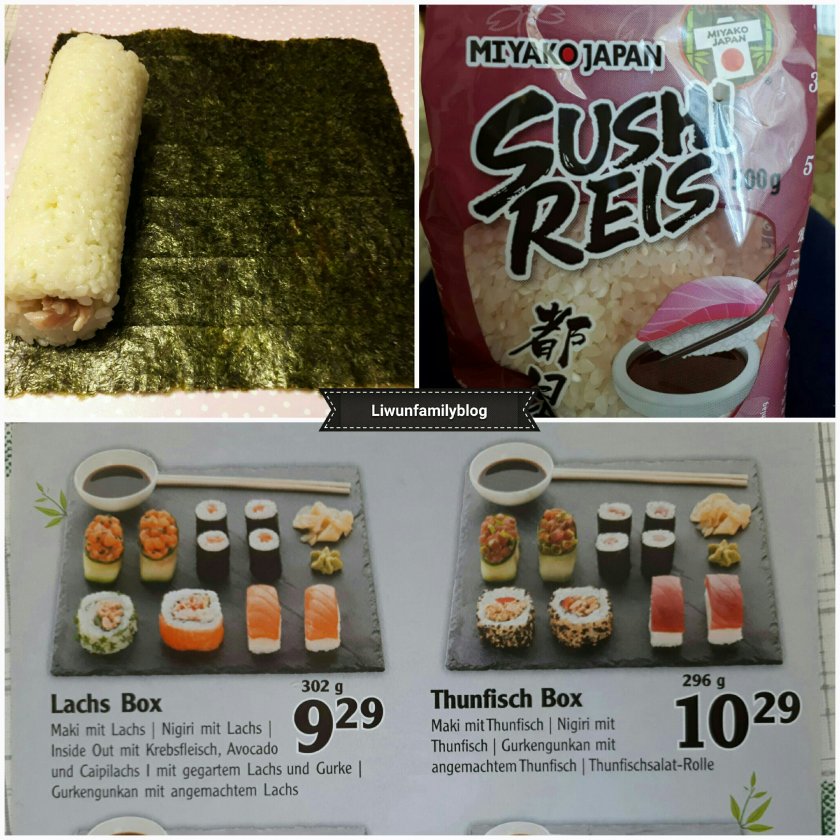 Top left: Before covering sushi roll by nori leaf. Top right: Sushi rice. Down: All variants of sushi which offered by supermarket.

1. Choose sushi rice. Rice is totally different like normal rice what I eat everyday. Go to supermarket then you can find it easier.

2. Took 1 cup of sushi rice then rinse it two times. Transfer it to rice cooker around 15 min. The water could be measured by one bar your finger line. Cook the rice and allow it to cool.

3. Which ingredients do you want for the sushi filling lengthways? I’d prefer salmon baked and paprika. Cut them into fine strips.

4. Open the sushi mould, coat each side with a bit vegetable oil.

5. Before filling two halves of mould, rinse your hands and keep them wet. Put cooked rice into the threaded end of mould.

6. Use the plunger to press rice in each half. Then place all ingredients (see no.3) you want for the sushi filling.

7. Place the thread of one half of the mould. Met up two halves of the mould then fasten tighthened with clips.

8. Place the lid on the open end of the mould and twist it then it can not moved.

9. Twist the plunger out of the thread, press slowly the sushi roll out of the mould.

10. Place the sushi roll upon one nori leaf. Wrap the nori leaf around the whole of sushi.

12. Use a sharp knife to cut the sushi roll into slices.

I am welcome to response if any questions. Happy trying😄

I can do all things through Christ who strengthens me [Philippians 4:13] View all posts by Anna Liwun

5 thoughts on “How to Make Sushi by Sushi Maker”

This site uses Akismet to reduce spam. Learn how your comment data is processed.

"I can do all things through Him who strengthens me" (Phillipians 14:3)

All photos and videos reserved. Those belong to Anna Liwun for personal documentation. Please tag this blog when you want to have those.

If you are interested to copy or have my articles, please put this link.